When depth is added to a two-dimensional object “Space” is created, it is what encompasses everything around us. Space can be looked at through a number of lenses, physical, psychological, objective.

Space plays an important role in a painting or an artwork. It helps the viewer get a clearer picture about what is actually happening along with it surroundings, though its dimensionality.

I saw this painting on social media from the Hammer Museum in LA, although I don’t know its name or the artist, this painting intrigued me. It has so much detail that it instantly gives you information about the people in its and the surroundings. It game me the impression of an English society at some kind of a match or a derby, sitting on the bleachers. The spectrum of people in the society is also captured through the painting showing that all of them are from the same social strata because of their clothes and how integrated each of them are with each other. Even though the painting literally has only humans you can easily tell so much about the space they’re in. 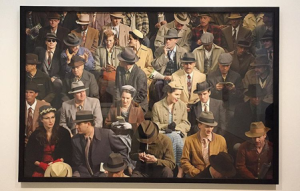 One would think without 3D rendering in paining, gauging the space or the surroundings would not be possible. However, when there isn’t dimensionality in the paining, what exemplifies its space and surroundings are the protagonist or elements. For example, miniature paintings don’t really have rendering but we still understand the its space though the clothing, colors and paining style.