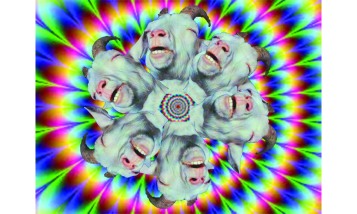 The Chola dynasty came into power in the 9th century, and ruled till the 13th century, over South India, Sri Lanka, the Maldives Islands, and even parts of the Indonesian island. During their reign poetry, drama, music, and dance flourished.

Temple bronzes produced under the Chola dynasty of south India are among the most spectacular works of art ever created in the world. During this period bronze casting reached a level of excellence, and sculptures developed a level of artistry finesse.

These works of art exemplified the graceful forms, delicate modeling, and technical sophistication. They also played a big role in demonstrating the integral role they played, and continue to play, in the rich tradition of Hindu mythology. Another key feature of these bronze sculptures is their paradoxical mix of the spiritual and the sensual.

Krishna dancing on Kaliya, one of the famous Chola bronze sculptures, rests in the Asia Society Museum, New York. This sculpture depicts the victory of Lord Krishna in overcoming Kaliya, a snake king who had been poisoning the waters of the sacred Yamuna River and terrifying the local population.[1]

Lord Krishna’s hand gesture is like a gesture of reassurance, done to comfort his devotees. Apart from the spiritual characteristics that makes this sculpture an idol of worship, the sensual appearances are unique, and seen only in the Chola works of art. The figure of this masculine God isn’t like the perceived body of an extremely built figure but holds a petite persona yet embodying masculinity. The snake holds a sexual connotation as is phallic in nature.

The Chola sculptures have idolised forms of beauty, which make the art works striking and different. The position of Lord Krishna is popular symbol for Gods. The intricate detail giving for ornamentation makes the model seem real, projecting the excellence of their craftsmanship.

Shiva as Lord of Dance (Nataraja)

Nataraja (the Lord of Dance), is a representation of the Hindu God, Shiva. He is shown as the cosmic dancer who performs his divine dance to destroy the universe. The Nataraja originated in the state of Tamil Nadu in Southern India.

It is said that if a single icon had to be selected to represent the extraordinarily rich and complex cultural heritage of India, the Shiva Nataraja is most suitable and the best choice. The nataraj is the most famous of all the bronze icons in the Metropolitan Museum of Art, New York City. It is known to be so excellent in its iconic form that it comes as close to being a abstract of the intelligence of the Indian people. The cobra uncoils from his lower right forearm, and the crescent moon and a skull are on his crest. He dances within an arch of flames. This dance is called the Dance of Bliss and the upper right hand holds a small drum shaped like an hourglass.

The image above comprises of two pictures with possibly the same girl standing still in one while she strikes a pose in the other. She is wearing a simple, ankle length, navy blue dress in the picture on the left and a short, slightly revealing red and blue dress in the picture on the right. There seems to be a transformation in attitude from one picture to another. In the left picture, her body language suggests that’s she looks nerdy, suppressed and mostly sad, she seems to be in the dark, struggling to get out of the situation that she is in currently. On the right however, she stands tall with her head high like she may be challenging the person in front of her. She is fearless and her expression appears to be dominating. That extra dash of red in her dress adds to her fire. The heels that she is wearing add to her height and help enhance her posture. Her hair and make up accentuate the entire look. The picture on the right has a blue background as opposed to the yellow one on the left. This adds life to the image. Besides, there is a ray of light directed towards her which probably means that she alone is the one under the spotlight in a larger area.

Hussain was now an orphan. They had killed his parents last summer and were now on the hunt for him, his uncles and aunts and his younger siblings. He didn’t know who “they” were or why they wanted his head but he knew that sooner or later, they would come for him. He spent each day in the fear that it might be his last. According to his uncles, living in an isolated cottage a little away from civilization was the solution to their problem. They tried to protect Hussain and his siblings by never letting them out of the house. One evening his uncles went hunting leaving him in charge. He comforted his family and tucked them into bed and sat leaning against the wall, peering through the tiny hole. After an hour or two, he saw his uncles returning with a huge animal, a hearty meal but they seemed to be more in number. This got him thinking. As they got closer, he could see five men with guns in their hands. As soon as they crossed the bridge, those men he cringed at the sound of bullets. The next thing he saw were dead bodies lying pure white snow, slowly coloring it red. He knew it was his turn next. Incapable of any action, he gasped for air, took his last few breaths and prepared to re-unite with his parents.

It feels as though the ocean of blue and purple has flown through this and left some of its frothyness on its risen parts.I can see my reflection in this piece as if it was made for me and how much sentimental value it carries for me, only I know.The waves of my childhoof flood my being.

The light bounces off into oblivion and leaves it mark on the blue surface.

The centre is a galaxy of stars coming down on us with its black darkness enveloping the focus of the image.The line on it is the shooting star aiming straight for our souls.

The white is a kind of purity that has creeped into some parts and catches your eye, it reminds me of clouds that flitted away while I sat staring at them from the window seat that I had.

The object in question has a hint of glitter tucked away in its most hidden parts that only a patient eye can witness. The background makes it feel as though someone has cut it into two and then joined them to make it look whole again.The patch of skin has so much depth in it, with different shades and so many lines crossing each others path,just like us humans.