Iteration #1:
Initially, we were thinking of things and processes that our mundane in our life which would help that bring about the mechanical monotony of our soundtrack. According to us, our mash up seemed to resemble tons of machines being used and constantly working at the same time. So, machines used in factories inspired our first idea, our video would comment on mass production vs nature. It would show the journey of a shoe being manufactured in a factory, followed by being walked around in and then finally end with it disintegrating into nature.

Feedback:
The feedback we got on our first idea was that in our first look of the video, the making of the shoe was not coming across too strongly. We were also facing difficulties in execution (we were lacking footage due to locating factories, permissions and other things) so, we were asked to think of another concept that would be more practical in terms of execution and would also connect with our soundtrack.

Iteration #2:
So, we started to think of other mechanical processes and well what are humans if not machines? We thought of reflecting on our college lives with a comic twist – “The life of a design student” (sigh). We thought that our life mimics the monotony of the soundtrack and so we chose this concept for our music video.

When we sit down to work, we are easily distracted and after hours of procrastination we either end up with work or … well sometimes things don’t really turn out the way we plan them – well that’s our life!

The sounds used in this soundtrack are from various mundane objects that are a part of our everyday routine that we over look. In the beginning, there are random sounds played in isolation and then the sounds slowly build up and create a rhythm, as all the sounds play in a symphony. This mash-up aims to a sense of a lifeless, perfunctory, and a mechanical way of life.

What is the most prominent memory of yours? Do you remember the first day of school? The first time you ate something spicy, the first time you saw snow? All of these amazing memories that we have somehow keep coming back to us by little things. If you get a particular smell it triggers a memory of it. Our senses are these important tools that help us hold onto these nostalgic moments in the way we do.

Living in Mumbai one of the most common memories that we all shared were of the rains, whether the good part of it or the bad. We have all had memories connected to it. We chose to showcase our most prominent memory of rain i.e, every time we see rain, its the one memory we all relate too. The two things that stood out for us in respective to the good and bad were Dancing of the peacocks and the using of vipers. What we realised is both the opening of the peacock feathers and the motion of vipers are very similar. We tried to incorporate both of them and realised it represented a hand fan, added bonus we suppose. In order to merge both of it, we used vipers to create the skeleton of the fan, and tie-dyed white fabric in shades of blue, green, yellow to represent the peacock . Since we dint want it to be very literal, we decided to tie-dye the fabric.We also sketched out our most prominent memories in between the structure. Those include, bike riding, drive to manali in the middle of the night, eating butta (corn) in lonavala, maggi and tea, and marine drive. We also incorporated the smell of sandalwood to remind us of the first rains and added Raag Malhar also known as the Rain Raga (it is said that by playing the Raag Malhar, one is inviting the rains) to the fan in order to recreate sound. 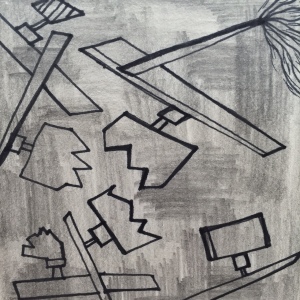 Walking in through the cartridge movements, I was being slamed from one end of the room to the other with a gigantic machine. The room’s smell was getting stronger with each push where I felt suffocated by the chemicals. While I was pushed back and forth, I had no idea where I was headed, in this pitch-black space. As the momentum started to speed up even more, I was being tugged from one end to another. The last tug was a sudden push out of this dark space, where I found myself covered in black, just like what I could see from within the space. On coming out I was splashed by I clear flow of water from above me. I don’t know if this made me laugh or cry.

The sounds used in this soundtrack are mundane, sounds part of everyday routine that we over look.

In the beginning, this mashup creates a sense of confusion, as there are only random sounds played.
The solo sounds build up and create a rhythm and somehow it makes me imagine that I’m stuck in a traffic jam and all the cars start honking in a symphony.

As the man was cutting down the tree with his axe, he heard a strange noise that he could not understand. He continued to cut, and the noise just kept getting longer and louder. He tried hard to recognize these strange noises but was miserably failing to do so. He suddenly stopped as a strong gush of wind came his way and he could not hold his ground, the strange noise however did not fade, only to be startled more and more by them. He recognized a sound that was familiar to coughing and giggling; he started getting curiouser and curiouser before it all came to a random and sudden halt. Everything became pindrop silence.

She walked around looking for something that would take her mind off the loss she had just faced. Having lost her grandmother who was her only source of inspiration had taken a toll on her health too. She dragged herself through the roads with towers being constructed on either sides. Men working in scorching heat continuously to earn the few pennies that they get from their entire day work. Memories of her grandmother took her thoughts away again from her surroundings. Just when she heard something and looked behind her. An old lady with a wrinkled face had tripped and fallen and was struggling to get back to her feel again. She ran towards her to give her a hand. They struck a conversation as she helped her get back home safely. Since that day , she would go to meet her frequently and pass their time with stories and laughs. She lost someone but also she gained someone just amongst those sad days. A grandmother whom she cherished through her entire life.

This picture is from one of my projects in the 3rd semester. It is a part of an exhibition space that I designed. With the brownish beige color of plywood, the white color of the sun board compliments it giving it a certain aesthetic appeal. It becomes easier to differentiate the temporary exhibition space from the permanent structure because of the different materials used. A human figure in blue shows the scale of the entire structure. Wooden sticks holding papers for display, pedestals made out of sun board and steps taking a person to different levels of the exhibition make up this image. One’s eyes start from the pedestals at the lower part of the image and travel up to the highest point of the exhibit where it travels down again by the series of steps. Use of just few colors, the color palette plays mainly around white and ochre with specks of blue showing displayed models and products. Overall this image is closely nit together where every object leads to another and are not separate objects placed in a frame.

This picture is taken from my home balcony. Just before the sun sets into the deep sea it creates this breathtaking artwork in the sky that leaves anyone who appreciates nature staring at the sky for those few minutes that it exists. While Mumbai known for it very upcoming infrastructure is shown in its silhouette, the beautiful colors of the sky give the entire image its charm. The silhouettes clearly show how Mumbai is transitioning to a city of high rises. Two buildings are under construction while on the right one can see few more already constructed buildings which increase in height. Though these buildings replace the nature that was existing there, the sky however still overpowers these humongous structures and does not fail to show its magnificence. The shades of yellows and oranges and blues and the slow transition between them make the sky so very exquisite and attractive to look at. While clouds the fairly spread over this sky reflects these shades and gives it and even more beauty to it. They help in creating a very smooth transition from orange to yellow to blue. They add allot of character to the image as a whole and gives it a certain texture.